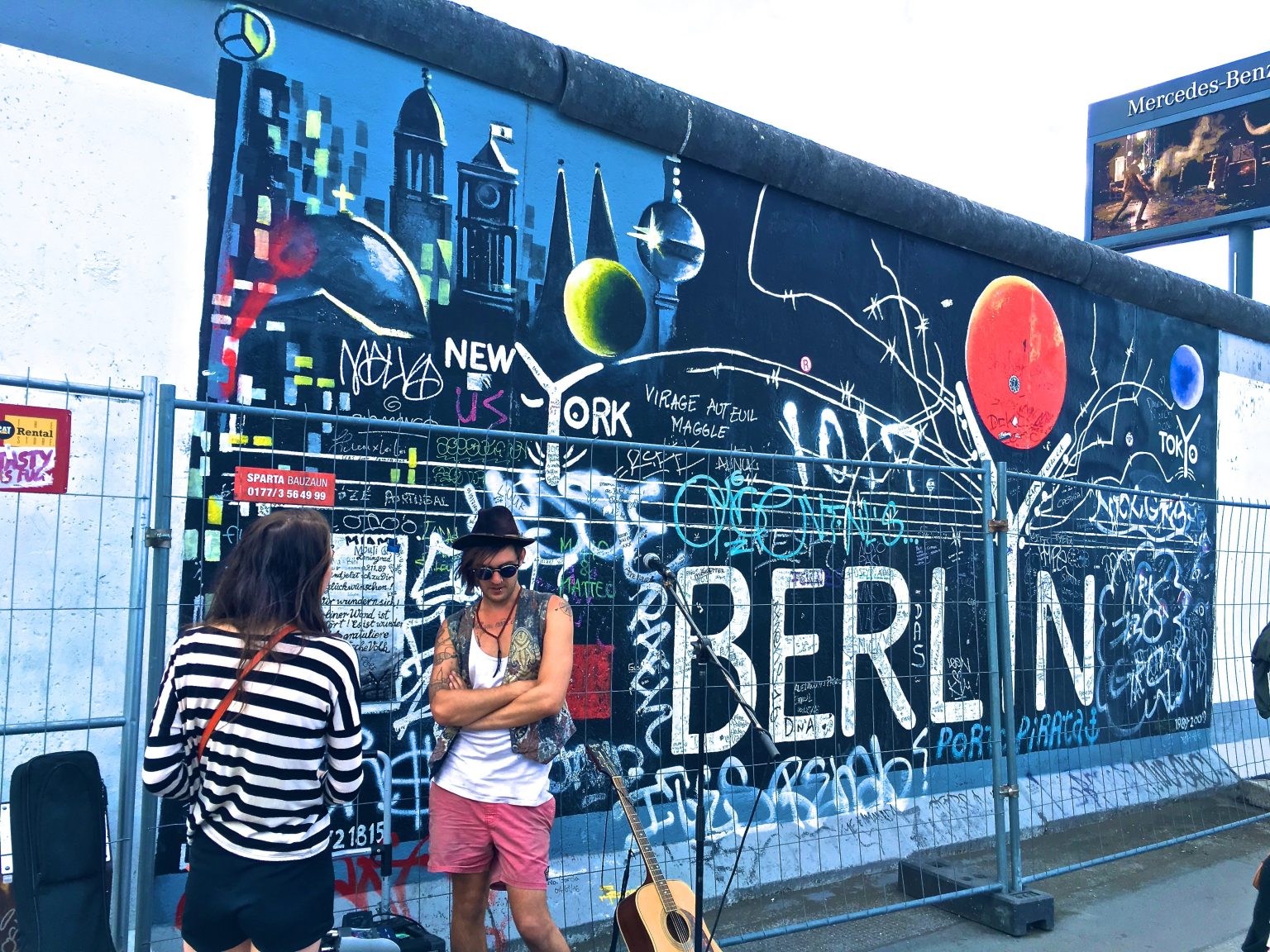 The AsiaBerlin Summit offers a platform to establish an international startup ecosystem between Berlin and Asia. We focus on the internationalization of startups across sectors such as: UrbanTech, HealthTech, FinTech, Social Impact, industry 4.0, AI, or blockchain.

With around 500 new tech startups per year, Berlin has a fast-growing startup scene and a successful infrastructure for financing and funding. With numerous incubators, accelerators, and coworking spaces, the city provides optimal conditions for entrepreneurs from around the world.

According to Berlin Partners, with approximately 40,000 business registrations per year, Berlin is undisputedly Germany’s founder capital and is expanding its nationwide lead. The capital is particularly attractive to potential entrepreneurs in the creative and technology industries.

Why is Asia attractive for Berlin startups? How is Berlin a lucrative city if Asian startups are looking to expand into Europe? Why are Asian and European Investors betting big on Berlin? Get these answers and deep dive into startup ecosystems at AsiaBerlin Summit 2020, 21-27 September. We bring to you startups across sectors such as artificial intelligence, machine learning, fintech, urban tech to talk about internationalization and their interest in Asia. Register here for the Summit. At AsiaBerlin Summit 2020, you will meet these speakers from Berlin Startups:

Ingmar Stupp will give a keynote on how AI/ML is changing the money lending landscape. He is a mechanical engineer turned entrepreneur after working in automotive with BMW and Bosch, now looking back onto 10+ years of experience in product management, design, and engineering. He has been working at the interface of startups, tech and machine learning since 2013. After building an online snack retailer in Russia, Ingmar stepped into financial services in 2016 when co-founding Finiata, a small business lender, raising 30m€ in venture capital and scaling liquidity solutions across two markets. Since July 2016 he has been CPO at Finiata. Under his leadership, the algorithm “Copernicus” was developed, the intelligent heart of Finiata, on the basis of which loans are now granted with a default rate of around two percent.

Michael Wax will contribute to a panel on Internationalisation and expansion for the perspective of Berlin startups. He is a serial entrepreneur with a successful track record building B2B software businesses, having collectively raised >$100M and hired >300 people. He is currently Co-Founder and Managing Director at Forto, Europe’s first digital freight forwarding company, building a digital backbone for the global trade market. Prior to founding Forto, Michael founded KONUX, an AI company that focuses on infrastructure monitoring, funded by investors such as Andy Bechtholsheim, NEA and Alibaba. Michael previously worked at Bain & Company and holds a Masters degree in industrial engineering from TU Munich.

Lubomila Jordanova will elaborate on flattening the climate change curve and the challenges involved in doing so. She is the founder and CEO of PlanA.Earth, a Berlin-based startup developing an algorithm that predicts where and how climate change will hit the hardest and software that helps businesses reduce their emissions by 50% within a year and save money while doing so. She also recently founded the Greentech Alliance, a collection of 300+ startups that are connected to over 200+ advisors from VC, media and business, who help them monthly with advice and feedback. Prior to Plan A, she worked in investment banking, venture capital and fintech in Asia and Europe. She was recently announced as 30 under 30 Social Entrepreneur of 2020 by Forbes and Entrepreneur to watch in Germany.

Jonas Schorr is Co-Founder and Managing Partner of Urban Impact, a Berlin-based innovation agency with a mission to accelerate Europe’s emerging Urban Tech Innovation ecosystem. Jonas spent the last ten years working on a variety of international projects in the field of sustainable cities in Germany, China, Singapore, the UK and Belgium. During this time he helped cities on their innovation strategies, supported city networks, think tanks and foundations with international knowledge exchange formats, worked on EU applied research projects for green cities and managed citizen-focused awareness raising campaigns for the European Commission. Since 2013 he’s been deeply involved in Berlin’s emerging Smart City scene and has been teaching a Summer University Course on Smart City Berlin at Berlin’s Technical University. With an interest in business as well as global media and communications, Jonas graduated from the London School of Economics and Fudan University in Shanghai.

His goal in life is to change the world and to increase the chance of a good future. Best described as an entrepreneur. After the exit of his AI sales company, he founded the social selling agency Artificial Link and the neuroscience company Braingrade. Happy that he had the opportunity to work with 100+ tech companies to scale their b2b sales incl. Microsoft, Twilio & Zuora. With Artificial Link, they build the digital presence of top executives to scale customer acquisition. With Braingrade, they try to provide direct access to our brains. Besides that, he supports the b2b sales community as a Mentor for Singularity University, Singa, Startupbootcamp, Betahouse and Founder Institute, Lecturer at the BITS University, German Ambassador of Sales Hacker and Chapter Officer of AA-ISP Germany. His charitable activities include Bitkom, Wirtschaftsrat, Mensa, Sandbox & Founders Pledge.

Aravinth is an interdisciplinary expert with 17+ years of global experience in science, engineering, arts and sustainability, with the core expertise in research, development, and production of electro-mechanical embedded systems and digital products. At the Summit, he will be contributing to a panel on 𝗧𝗲𝗰𝗵 𝗳𝗼𝗿 𝗚𝗼𝗼𝗱 – 𝗜𝗻𝗻𝗼𝘃𝗮𝘁𝗶𝗼𝗻 𝗺𝗲𝗲𝘁𝘀 𝘄𝗲𝗹𝗹-𝗯𝗲𝗶𝗻𝗴 and a Fireside Chat : 𝗦𝗼𝗰𝗶𝗮𝗹 𝗘𝗻𝗴𝗮𝗴𝗲𝗺𝗲𝗻𝘁𝘀 𝗶𝗻 𝘁𝗶𝗺𝗲𝘀 𝗼𝗳 𝗖𝗢𝗩𝗜𝗗-𝟭𝟵. As an engineer, he worked for 2 big corporations and worked for 8 tech startups in Asia & Europe. As an entrepreneur, he co-founded 7 organizations in Asia & Europe. As a scientist, he researched at 4 academic research institutions in Germany. As an educator, he trained several young innovators and mentored 120+ deep tech startups globally. As an advisor, he is affiliated with 23 organizations and supported several individuals & organizations in more than 50 countries. As an artist, he has co-created several new media art installations which attracted more than 1.5 million visitors in Germany, Australia & the USA. As a community builder, he co-created and has been curating several communities in Asia, Europe & Africa.

Iris Braun is one of the founders of share, a social consumer goods brand based on the 1+1 concept: For every share product sold, a person in need receives an equivalent product. At the Summit, she will talk about the social engagements in the time of COVID. She has created the products and projects with share’s social partners before now leading the international business for share. Braun started her career at the Boston Consulting Group where she worked on strategy for consumer goods companies as well as for the United Nations World Food Programme. She then was a researcher on various development projects, doing social impact evaluations. Her work led her to Rwanda, Bangladesh and India, where she also lived for several years. Iris holds an MPA from Harvard University in Development Economics and a BA from Oxford University in Philosophy, Politics and Economics.Iris Braun, Chief International Officer of Share Foods GmBH will talk about the social engagements in the time of COVID.

Bruce Pon will discuss the state of Blockchain in Berlin and what it holds for the future. Bruce has helped to build a dozen bank and industry startups in Europe, Asia and the Americas while working with leading companies such as Mercedes-Benz, Volkswagen, Mitsubishi Corporation, Accenture and DuPont. Prior to joining ascribe.io, Bruce was a co-founder/Partner of Avantalion International Consulting in Germany. He is an advisor/investor to six startups. Bruce has an Advanced Executive Certificate from MIT Sloan and a B.Sc in Engineering from the University of Saskatchewan. Bruce is a Master Practitioner of NLP, speaks English and German and has studied French, Russian and Chinese.

Mike Richardson, founder and managing director of Photonic Insights, is a deep technology entrepreneur who designs and builds IoT devices for real-time materials analysis. At the Summit, he will deliver a keynote on IOT solutions for covid: An Asia Berlin Perspective. He is a project evaluator for EIT Health where he uses his expertise in Photonics, Spectroscopy, Hardware, Med Tech and Artificial Intelligence to support Pan-European development of advanced medical technology. Mike is a Business Mentor for the German Accelerator South East Asia supporting German startups entering the ASEAN market and a passionate supporter of the deep technology community in Berlin and Asia.

Mali is one of the people shaping the future of female founders and opportunities at the startup ecosystems in Berlin and other parts of Germany. At the Summit, she is actively involved in the investor’s day on 23 September, is having a fireside chat with Hiroaki Kageyama of Asics Ventures on Day 1, and is moderating a panel on what catches the investor’s eye in 2020 on Day 2 of the Summit.

Born in Bangalore, India, Shaam has an MBA from Harvard University and worked in the auto industry and financial services before moving to Berlin in 2012. As a passionate traveler, it was while backpacking around Europe in 2010 after completing his studies that Shaam first became aware of the need to improve the transport booking system across the continent. Although the trip was a fantastic experience, Naren found he was spending more time buying tickets and planning trips than enjoying them. There was no centralized, clear platform, to find, compare and book train, bus and flight options. The inspiration behind Omio was born and in 2012 Shaam packed up his life in New York, moved to Berlin and the Omio journey began. Since then Omio has grown across Europe to become a leading travel search and booking platform. Today it has more than 800 transportation partners, providing travel ticketing in more than 35 different countries to customers from around the world.

(Please note that we are still updating this list and more speakers will be added until the Summit. Here is the current list of speakers. )